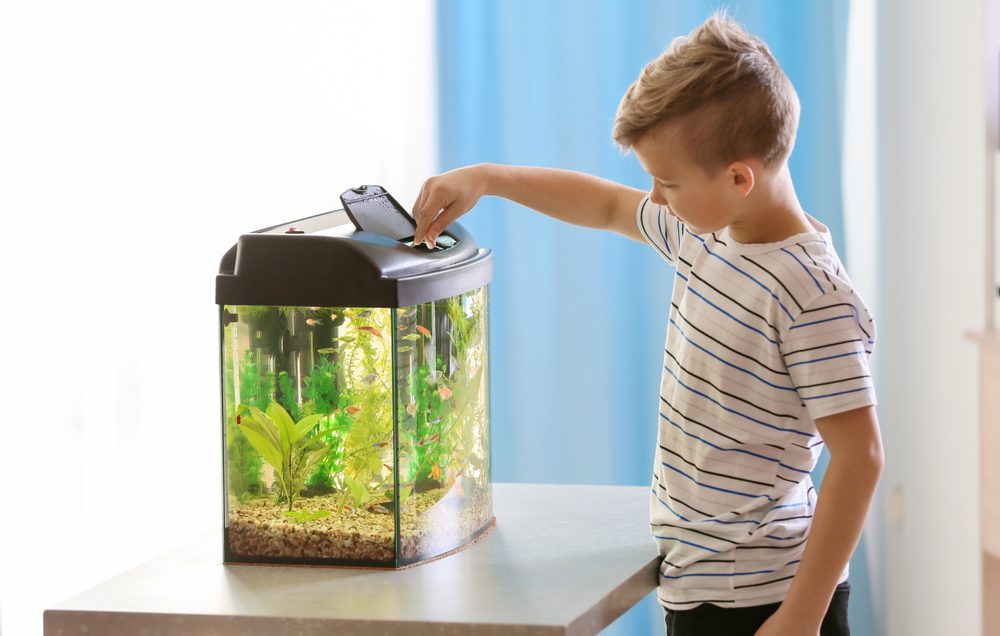 Fish are very good pets for many reasons, but a good pet is of no use if it doesn’t live long. There are many things that affect the life expectancy of your fish and the feed time of fish is one of them.

If you are thinking about getting a pet fish, then there is something you should know. A lot of people think that feeding fish on a daily basis is the ideal way to do it. However, the thing you need to pay attention to is that the right amount of food depends on several factors, like what kind of breed your fish is, the size of its tank, and even where it comes from. These will eventually affect the number of feedings your fish will need.

Feeding fish at certain times can help you make sure that your fish are eating enough food and getting the nutrients they need to thrive.

Different types of fish have different dietary needs. some fish are best fed several times a day, while others may need only one or two meals per day.

Picking the optimal time of day to feed fish will vary depending on the species, but a good rule of thumb is to give your fish two small meals a day, one in the morning and one in the evening.

Fish are usually most active in the morning and early evening, meaning that they’ll be more likely to eat when they first wake up, thus making it the best feed time for fish.

Whether you feed them first thing in the morning or before you go to bed at night, they should be able to digest their food throughout the day before their next meal.

When coming up with their mealtimes, make sure that you adjust their feeding times for their sleeping patterns. In general, fish are nocturnal creatures—so fish eat at night and sleep during the day! If you have nocturnal fish, it might be easiest to feed them right before bed so they can get breakfast while they dream away.

How Much Should You Feed Your Fish?

The amount of food you should be feeding your fish depends on a few things.

A goldfish is going to need more food than a betta, who is a smaller fish and would eat less.

Size of the Fish

A larger goldfish is obviously going to need more food than a small one.

Age of the Fish

Older fish eat less because they’re not growing as quickly as younger ones.

Number of Fish in Aquarium

Finally, how many fish you have in your tank is important as well. If you have 20 goldfish swimming around in there, you’re going to need to feed them more than if there were only 5 in there.

In General, Fish feed should be given in an amount that is equal to the amount of food that can be consumed within a period of three minutes. The feeding frequency depends on the type of feed and the feeding method being used. It is recommended to use 5-10% of the bodyweight of the fish per day as a general guideline for feeding.

When to Feed Fish for First Time?

It depends on how they were raised. If they are wild-caught, they are used to eating naturally occurring food. They can be fed right away, but you should start slowly, with a very small amount of food. If the fish were raised in captivity and have had pellets, you should wait 48 hours before feeding them. This is because they may be constipated from the pellets they have been eating, and will need time to pass any build-up in their digestive system.

When to Feed Fish After Buying?

The first few days after bringing home a new fish can be the most stressful for your fish. It takes a lot of energy for a fish to adjust to its new surroundings, so you don’t want to overfeed your fish right away.

Ideally, you should wait at least 24 hours before feeding your new fish. This will give your fish time to get used to its new environment and settle in before being introduced to food.

You can then start feeding your fish small amounts of food every day or every other day. Be sure to only give them as much food as they can eat in 2 or 3 minutes – otherwise, they may become bloated and sick!

Making sure that your tank has plenty of hiding places is also important because this will help keep stress levels down while they adjust to their new surroundings.

Which Feed is Best for Fish?

Their diets are of paramount importance as they cannot tell you what they like to eat. There are many types of fish, but it should be noted that the basic requirements for fish food are the same. The most important thing to consider when choosing the right food is the kind of fish you have.

The type of food your fish needs also depends on their size, age, gender, and even color. Aquarium fish are generally fed dried food, though some owners prefer to feed their fish live food.

Can You Feed Fish During Treatment?

The short answer is, No. During a period of treatment with medications, you should not feed your fish. This prevents the medication from being diluted or wasted on digestion.

Secondly, the uneaten food will be soaked up by the bacteria in your pond. This will make the bacteria stronger and can potentially cause the treatment to be less powerful.

However, if you have an aggressive or voracious fish, they may actually eat the medicine, which will make it even less effective. In this instance, you may choose to feed your fish a small amount of food at regular intervals in order to keep them away from eating the medicine. But make sure that there is not much uneaten food left in the tank

Keep Your Fish Healthy by Not Overfeeding Them

Keeping fish alive is a lot more difficult than it looks. I know, they’re pretty low-maintenance pets. But they still have needs.

One of the easiest mistakes to make when keeping fish is overfeeding them. You look at your beautiful new friend and think “I don’t feel like they’ve had enough food,” and so you throw in another pinch of flakes. And then maybe another one, just to make sure they got enough.

Do you know, that overfeeding can lead to problems for your fish? so it’s important to keep an eye on how much you give them.

What Happens If You Overfeed Fish?

Fish are actually less hungry when they’re not hungry if that makes sense at all. Their stomachs are designed to process food really slowly, so overfeeding them can lead to digestion problems and even death!

Even if too much food doesn’t kill a fish outright, it can lead to long-term health problems down the road. Fish need a nutritious diet with protein and fiber in their foods, but only in moderation. And a healthy amount of exercise is critical for preventing obesity in fish, too. Uneaten food can affect the aquarium water quality as well.

So when it comes to feeding your fish, always err on the side of caution. You’ll both be happier and healthier!

Many people who own fish don’t think about how much food their fish need. Often, pet owners will just throw in a handful of fish food and call it good. But this is actually a bad idea for the health of your fish. There has to be proper feed time for fish.

You should follow the feeding guidelines on your package of fish food, or the amount suggested by an experienced aquarist. Overfeeding can lead to the growth of dangerous bacteria in your tank, which can harm or even kill your fish.

The best way to keep your fish healthy is to feed them the exact right amount, and no more!